Seduzione Etrusca presents the contribution of Britain to the rediscovery of the Etruscans from the 18th century till the beginning of this century. The exhibition itinerary begins at the ground floor halls of Palazzo Casali. This section of the exhibition showcases the main features of a Grand Tour, a long educational trip throughout continental Europe undertaken from the 17th century on by young and rich European noblemen wishing to widen their knowledge of the world. The final destination was usually Italy or, less often, Greece. During their Tour, these young men were learning more about politics, culture, arts and antiquities of the European countries. They used to spend their time visiting monuments and purchasing works of art. The next hall presents the Grand Tour undertaken by Lord Thomas Coke, a British nobleman who is the protagonist of the first part of the exhibition as he left home for an educational trip in search of the values of the ancient western civilization to which Britain considered itself the natural heir. This Grand Tour was to last for six years, from 1712 to 1718, throughout France and Italy and mainly to Florence, Pisa and Rome. His family and his entourage are well presented through paintings portraying his family members and the persons who followed him on this trip like his tutor Thomas Hobart, a graduate in medicine; the overall context is also reconstructed through some objects related to his trip, such as the notebook where he took note of all his expenses. The exhibition continues in the next hall by showing Holkham Hall, the magnificent Palladian mansion the earl of Leicester built at the end of his trip where all his family collections are still preserved.

Then, visitors are invited to cross the internal courtyard and, through the monumental staircase leading to the piano nobile of Palazzo Casali, they reach the Sala dei Mappamondi, a hall with world globes. Here, between two historic world globes by Moroncelli, it is possible to admire some 18th century guidebooks of Rome and Florence, the two most important cities where Lord Coke stayed during his Tour.

By turning right visitors enter the salone Mediceo, where they can admire some objects Lord Thomas Coke purchased during his trip to France and to Rome, in particular, which reveal his passion for antiquity: drawings on classical subjects, manuscripts about Livy’s Historia and some paintings hung on the walls showing scenes taken from Livy’s Historia (Tarquinius and Lucretia) and from Virgil’s Aeneid (Vision of Aeneas in the Elysian Fields), which were directly commissioned to Italian painters, and views of monuments and of idealized Italian landscape. 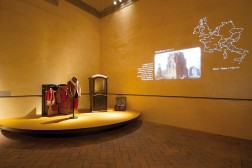 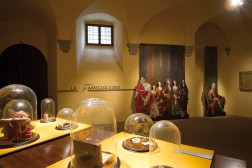 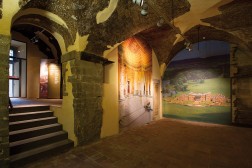 In the small halls behind the salone Mediceo the exhibition presents Lord Coke’s stay in Florence, where he met the Grand Duke’s entourage and Filippo Buonarroti, a powerful minister and the “lucumone perpetuo” or director of the Accademia Etrusca in Cortona. Buonarroti and Coke conceived the publication of the first printed book on the Etruscans, the De Etruria Regali, starting from a manuscript by Thomas Dempster dedicated to the history of the Etruscan civilization, which was written a century before by this Scottish scholar at the service of Cosimo III and that Lord Coke purchased in Florence.

Buonarroti’s world is represented by some of his manuscripts and printed works and by two renowned archaeological works that belonged to his family and come from his house: the Lyre-Playing Satyr and the Stele of Larth Ninie (the earliest decorated gravestone of the Fiesole school), which are included within the De Etruria Regali printed book. After passing the Tommasi’s Halls of the Accademia, which are decorated with typical pieces of furniture of that time and represent the dozens of Italian elites with whom Lord Coke came into contact during his trip, visitors arrive at the last one of the Tommasi’s halls where the history of the De Etruria Regali publication is presented.

Here Thomas Dempster’s manuscript, which Lord Coke purchased, is displayed: its bindings bear the coat of arms of the Coke family, an ostrich holding a horseshoe in its beak as it appears on the main image of the exhibition, with a portrait of Grand Duke Cosimo III to whom this work was dedicated. 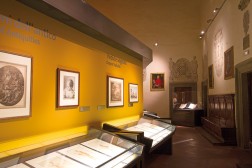 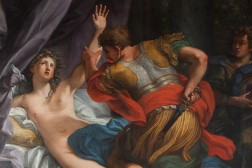 In the adjacent hall it is possible to admire the two printed volumes of the De Etruria Regali, which are both open on their frontispieces presenting portraits of Cosimo III and Giangastone de’ Medici respectively (the two grand dukes to whom these works were dedicated) with the busts of these two reigning dukes, as well as a series of beautiful original preparatory drawings coming from Holkham Hall and representing some Etruscan archaeological finds. These drawings made by illustrators of that time were sent to different private collections and presented the finds before being finally reproduced in the book illustrations: the most relevant drawings among others are those of the Plikasna Situla, the Stele of Larth Ninie, and the Putto Graziani. Then the salone del Biscione is characterized by the showcase of some copperplates engravings for printing illustrations coming from Holkham Hall: the portraits of the two grand dukes, the Dog “Calustla”, the Putto Graziani, the Chimera of Arezzo, and the Arringatore.

In continuity to Thomas Coke’s Tour and to the work of the team of draughtsmen appointed to reproduce the Etruscan masterpieces known at that time we can see the original statues of the Arringatore and the Putto Graziani, a copy of the Chimera of Arezzo, the Plikasna Situla, the Patera Cospiana (a finely engraved mirror representing Athena’s birth out of the head of Zeus) and many other vases and finds belonging to the main Etruscan collections of that time and reproduced in the illustrations of the book. After the first book on the Etruscans was released, the whole Anglo-Saxon world started being fascinated with this antique civilization in many fields such as arts, furniture, and collecting which led to the creation of a significant collection of Etruscan finds displayed at the British Museum. Over 50 beautiful finds coming from this great London museum show that period and are gathered according to the location where they were found: Prato, the Falterona Lake of Idols, Arezzo, Lucignano, Cortona, Sarteano, Chiusi, Perugia, Orvieto, Bolsena and Vulci. This is a complete collection providing samples of the Etruscan arts in the fields of ceramics, jewellery, sculpture in the round, bas-relieves, bronzes, together with a series of 19th century drawings representing the same items. 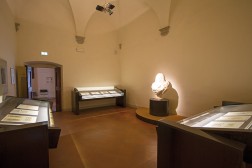 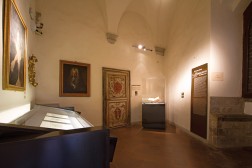 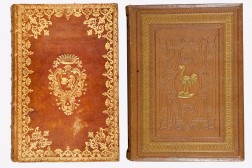 The exhibition ends with the showcase of two ceramic vases with human head from Wedgwood, a British factory producing Etruscan-style items since the mid 1800s, and a selection of objects from the Accademia Etrusca, which was founded in 1727, a year after the publication of the De Etruria Regali, which are culturally related to the Anglo-Saxon world and with the Society of Antiquaries of London in particular: medals and period paintings portraying British members and directors of the Accademia, and books offered by British personalities of the Accademia. A series of famous archaeological objects from the Accademia, such as the Zeus of Firenzuola and the Etruscan Bronze Lamp, are presented through the passionate descriptions included in the travel journals and in the printed works of British travellers, who continued visiting Tuscany in the 19th century, like George Dennis first among everyone else.

A museum, an exhibition, its layout blending together as one